How many have walked this path? 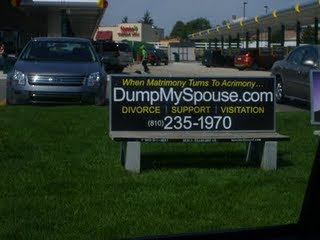 Flint Divorce attorney comments.
Lawyer advice on the issues of the "Carrere Divorce".
Divorce law and procedure if it was filed in Michigan.

Wayne's World star Tia Carrere has filed for divorce to end her seven-year marriage.
Grounds for divorce in Michigan. What divorce paperwork was necessary?

“[T]here has been a breakdown of the marriage relationship to the extent that the objects of matrimony have been destroyed and there remains no reasonable likelihood that the marriage can be preserved.”

In Michigan divorce procedure if she had filed here Tia Carrer may not include any other explanation of the grounds in the complaint. Here we are talking about filing for divorce. Her Husband Simon Wakelin could then admit or deny the grounds. The court may consider an admission but is not bound by it in its final deliberation.

The initial Michigan and Flint divorce documents in cases without children would be a summons, a complaint, filing fees, and a record of divorce or annulment (some counties require filing at the time of entry of the judgment).This will not be a cheap divorce.

If Carrere and Wakelin had minor children or a request for spousal support, a verified statement must be served on the other party and provided to the Friend of the Court. She did not have to state many reasons for the divorce. The initial filing for a divorce with minor children must also include information about custody proceedings and the names and birth dates of the minor children.

When getting a divorce in Michigan and Flint the Divorce petition or complaint must include the following:

The statutory grounds for divorce, without further explanation.

The parties’ complete names and their names before marriage.

Whether a party is pregnant.

The complete names and birth dates of any minors involved in the action, including minor children of the parties and all children born during the marriage.

Whether there is property to be divided.

If a request for protection of property is made, facts sufficient to support the relief requested.

If spousal support is requested, a showing of the need for support and the other party’s ability to pay.

If there are minors or a request for child support, whether any Michigan court has continuing jurisdiction over the minor and, if so, the court and file number.

Children and divorce create additional requirements. If custody of a minor is to be determined, the following must be included in the complaint or in an attached affidavit: (1) the child’s present address, (2) places where the child has lived within the last five years, (3) names and present addresses of persons with whom the child has lived during that period, (4) whether the party has participated in other litigation concerning the custody of the child in Michigan or elsewhere, (5) whether the party knows of a proceeding that could affect the current child custody proceeding, and (6) whether the party knows of a person who is not a party to the proceedings who has physical custody of the child or claims custody or parenting time rights.

Filing fees may be waived. Fees and costs must be waived or suspended for persons receiving public assistance and indigent persons. The judge may hold a hearing to determine if the person is indigent.

LONG OR SHORT TERM MARRIAGE. HE MAY THINK ITS CHEAPER TO KEEPER.NO MATTER TO HER SHE IS GETTING A DIVORCE.

In a Michigan and Flint contested Divorce , spousal support is a useful tool, especially when the attorney is representing a spouse in a long-term marraige or where there is a substantial disparity in income between the spouses. When a Flint divorce terminates a long-term marraige spousal support is used in its traditional sense as support and maintenance of a former spouse who is unable to support himself or herself at a comparable standard of living due to years of financial dependence. The longer the marraigethe older the recipient; the less able the recipient is to support himself or herself due to lack of education, job skills, or on-the-job experience; the more likely spousal support is to be awarded.

The actress filed papers in Los Angeles on Friday, citing irreconcilable differences for the split. [1] She is wondering what conditition her condition is in.

Most in Divorce have heard of no-fault divorce. The phrase no-fault divorce means it is not necessary to prove fault by a party—for example, infidelity or abuse—for a divorce to be granted. However, the court may consider fault in determining the distribution of property and in ruling on spousal support.

The Waynes world star 43 is acting as her own attorney.[2]

Many People in Michigan and flint Divorce represent themselves or appear in pro per.
Why:

Lack of funds to hire attorney

Maximum preservation of marital assets for division (avoid attorney fees even if they can be afforded).

She wed photographer Simon Wakelin, her second husband, on New Year's Eve in 2002.

Carrere is asking for sole custody of the couple's four-year-old daughter, Bianca. [1]

The term physical custody, as commonly used by the court, typically focuses on where the child resides. MCLA 722.26a(7)(a).

The court must make findings on this issue before deciding custody.
Statutory standard.

There is an established custodial environment if over an appreciable period of time, the child naturally looks to the custodian in that environment. The court must also consider

the age of the child,

the physical environment, and

the inclination of the custodian and the child as to the permanency of the relationship.

The court makes a factual determination regarding whether there is an established custodial environment; the court is not bound by the parties’ stipulation.
Determine burden of proof.

If there is an established custodial environment, a change of custody may be made only on clear and convincing evidence that the change is in the best interests of the child.

If no established custodial environment exists, custody may be changed on showing by a preponderance of the evidence that the custodial arrangement is in the best interests of the child.

Prior custody orders—mere existence does not create an established custodial environment.

Custodial parent voluntarily relinquishes custody—all factors must be examined to determine if a new custodial environment is created. Public policy encourages a parent with difficulties to temporarily relinquish custody to resolve his or her problems.

In prejudgment cases where the parties are residing together, the judge makes the determination on a preponderance of the evidence.

The best interests of the child is the standard used in custody disputes between parents, agencies, and third parties.

The court must consider each factor and make findings on the record.
The factors need not have equal weight; the court determines the weight of each factor.

(b) The capacity and disposition of the parties involved to give the child love, affection, and guidance and to continue the education and raising of the child in his or her religion or creed, if any. This factor tries to project the parent’s ability to foster an emotional bond in the future, and the parent’s impact on such matters as education, guidance, and religious training.

(c) The capacity and disposition of the parties involved to provide the child with food, clothing, medical care or other remedial care recognized and permitted under the laws of this state in place of medical care, and other material needs.

(d) The length of time the child has lived in a stable, satisfactory environment, and the desirability of maintaining continuity.

(e) The permanence, as a family unit, of the existing or proposed custodial home or homes. This factor focuses solely on the permanence of the family environment, not the acceptability of the home or child care arrangements.

(g) The mental and physical health of the parties involved. This factor should not impair or defeat the public policy goal of integrating disabled persons into the mainstream of society.

(h) The home, school, and community record of the child.

(k) Domestic violence, regardless of whether the violence was directed against or witnessed by the child.

( l ) Any other factor considered by the court to be relevant to a particular child custody dispute. The court may not consider the race of a parent’s spouse in considering whether to change custody.

The couple have a pre nuptial agreement.[2]

In a Flint Divorce Court MCLA 557.28, MSA 26.165(8) provides that a contract that relates to property and that is made between persons in contemplation of marriage remains in full force after the marriage takes place.

The Michigan Supreme Court recognized, in the early case of Hockenberry v Donovan, 170 Mich 370, 136 NW 389 (1912), that marital agreements will be enforced if the parties to the agreement are mature and have a full understanding of the agreement and no fraud is involved. Marriage, as well as the waiver of property rights, constitutes sufficient consideration to support the contract. Id. at 380.

The leading Michigan case on marital agreements that govern the distribution of property at death is In re Estate of Benker, 416 Mich 681, 331 NW2d 193 (1982). In Benker, the court affirmed that such antenuptial agreements are generally favored by public policy. However, the court also noted that there must be a fair disclosure of assets by both parties for the agreement to be valid. The court said premarital agreements “give rise to a special duty of disclosure not required in ordinary contract relationships so that the parties will be fully informed before entering into such agreements.” Id. at 689

NOT THE FIRST TIME

The actress' first marriage to Elie Samaha also ended in divorce after seven years. She split from the producer in 2000.[1]


To Find your Michgian County Court House go to